As I reflect on memorable incidents from my years in aviation maintenance, I am reminded of the importance of redundancy and safety engineered into the machines that we put ourselves and families in. Redundant systems and today’s high-quality safety features reinforce my faith in the quality of aircraft in general aviation. These two factors enable pilots to strap in and take to the sky with confidence, knowing the engineers who design our aircraft and mechanics who maintain them are key contributors in making the miracle of flight possible and without any issues.

One of the most memorable examples of how important these aspects are involved our shop being hired to look over a Mooney Acclaim coming to us on trade. The plane had an incident history and we had been maintaining it for several years. Many other shops might just take a quick look (kick the tires) if, like us, they were the regular caretakers of the plane. That would have been a tragic mistake, though, because the next flight on this plane would have been fatal.

Let me tell you why. We started the pre-buy evaluation by performing a ground run to warm up the engine, record performance numbers for the engine and do a functional check on the aircraft systems that can be done on the ground. This involved compression checks, oil samples, cutting open the oil filter, and looking in the cylinders for scoring, corrosion, and valve condition to see if the compression numbers came in low — all customary tasks.

We next documented any cosmetic items that were obvious before getting into the inspection. Over the years, this aircraft had several prop strike incidents which we knew about and were sure that the plane was repaired properly, up to Mooney and FAA standards. All the repairs were well documented in the logbooks. There were no adverse flight conditions reported, but what we about to uncover is downright scary. 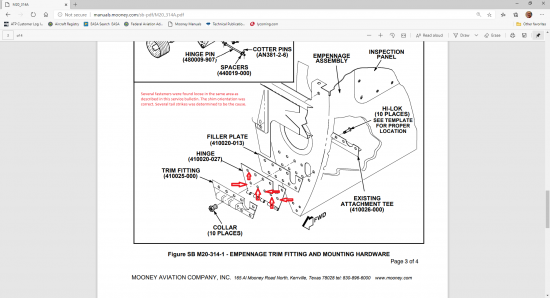 Mooney had released a service bulletin that subsequently was mandated by the FAA as an airworthiness directive. This involved a possible manufacturing error in the hinge assembly in the tail of these planes. The directive said that this condition, left unchecked, could lead to the loosening of the hinge assembly and loss of aircraft control. It’s noteworthy that we had previously done the mandatory inspection on the plane for this same condition. It was documented in the logbooks that the aircraft was, in fact, assembled properly. No further action required.

Because Premier doesn’t take shortcuts and we are dedicated to ensuring the safety of all the planes that we maintain, this area was looked at again, fortunately. During this second check, we noticed a sight dent in the tail by the tail tie-down. Further examination of the tail uncovered several fasteners loose. This was in the exact area described in the airworthiness directive. Had this gone unnoticed, the vertical control of the plane may have been completely lost. Mooney was advised of the condition and the plane was repaired with no further incident. We attributed the loose fasteners to not one — but several — tail strikes.

A shop unfamiliar with Mooneys may not have taken the time to investigate the tail section again. Was the previous owner just lucky or are these planes built to keep flying? Thankfully, we will never know that answer in this case.

The lesson: hire a knowledgeable and qualified shop to perform your pre-buy evaluation. It could save your life.