What should be important when it comes to aircraft maintenance? Is it money? Is it time? Is it convenience or is it safety?

Well if you use our shop it is definitely… Your Safety. We are a 145 Repair Station. This means that we must abide by more stringent regulations than non-certificated shops. We must have training programs in place. Every tech MUST review our maintenance procedures manual and be tested on those procedures regularly. We must use certified aircraft parts which have a traceability. We must be trained on the aircraft specifically named on our capabilities list. Most importantly we must have inspection after each maintenance function performed on any aircraft. This the rule and our company policy.

It is mandated that each repair or maintenance event is looked at and signed off by an inspector prior to the release of your plane. Does that cost more? Does that take more time? Is that inconvenient? Yes, this may be true, but the question should be will it ensure your safety. This answer is also true and the most important thing in aviation. The adage is very true and should be remembered that states “you cannot pull over to the nearest cloud if there is an emergency or failure.”

I recall an incident when I was called by our company president who just had gotten a call from an inbound customer very concerned that his engine was running very hot. I was asked to meet the customer as soon as he landed so we could figure out his problem. The pilot was very concerned because he had left a maintenance facility where he just had an oil change. Prior to this maintenance event the engine had run with normal cylinder head temperatures. Aircraft engines are mostly air cooled so we had thought that there may be an obstruction to the airflow around the cylinders. What we found was exactly that.

Upon the removal of the top cowling, we discovered a battery powered electric drill left right on top of the engine restricting the airflow around the cylinders. The engine had gotten so hot that the plastic drill had stared to melt right into the cooling fins of the cylinders. After removal of the drill and checking for any heat-related damage, the plane was returned to service with normal temperatures once again.

The problem may have occurred due to being rushed but could have been avoided if there was an inspector looking at the area worked on and issuing an “okay to close” as required by Part 145 Repair Station mandates. Had this item not been addressed or if the flight was longer, it may have been catastrophic.

Safety first…..always….. no matter the cost or the cost could be more than you can afford.

Have you ever had an annoying problem that no one has been able to fix?… 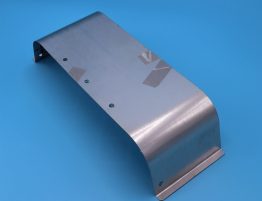